Last week we discussed focusing on words rather than ideas in poetry. After reflecting on that lesson and taking a few comments, I realized that particular activity didn’t quite provide enough of the powerful words I would like to see in poetry.  I remembered a poetry lesson I have used several times in the past: found poetry.

Found poetry takes texts that are decidedly not poetic and finds poetry in these texts.  Anything is up for grabs here except for texts already identified as poetry: newspapers, magazines, math books, packaging,signs, tax forms.

The detailed instructions I used to implement this lesson in my classroom can be found here.

What I had available in my classroom (since I decided to do this lesson on relatively short notice, ie. at 8:10 when class starts at 8:30) was a stack of old New York Times Upfront magazines.  I gave each student a small stack of magazines and told them to take about 10 minutes to look for an article that was interesting to them.

This wasn’t really a problem for my students, but I did tell them (because these are magazines focusing on current social issues), that for this exercise, I’m really not concerned about the ideas in the article, but more so the words.  I didn’t want them to get caught up trying to find an article they agreed with.  I did give them the hint that we would be using the article in a very different way than they had perhaps used articles before.

I chose the following article: 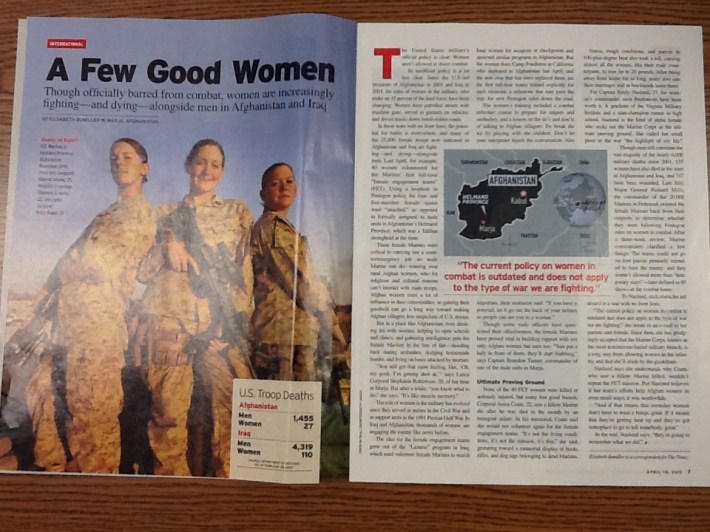 Next, I asked each student to read through the article and choose between 50 and 100 words from the article, creating a list in their writer’s notebooks.  The words must remain in the order they appear in the article.  Here’s part of my list:

Then, each student reads through the word list and reduces it by half, crossing out any words that seem weak or unrelated or out of place.  At this point, they should start to think about how the words flow poetically.

This is also the part where I realized that in order to get the poetic flow I needed for my list, I would need to return to the article and find a few more words even as I was reducing the list.  The words still have to remain in order, however; so, I only allowed myself to add words that actually appeared in the sequence of the list I had already created.

Now for the fun but brain-bending part: arrange the word list on a separate page.  Break the words into lines, add punctuation if desired, and determine the use of white space.  This, according to my students, is much harder than it sounds.

Here’s my poem, unrevised, mind you:

Remember what we did.

This practice is excellent for getting to the essence of a piece of writing. Or perhaps for pulling out an essence that isn’t readily apparent through the lens of prose.

It’s also a way of looking at a text or subject through the lens of “other” or “alien.” Sometimes when we distance ourselves somehow from a text deliberately, we see more than we would by looking at the text in traditional ways.  We can read the features of a genre by intentionally transforming those features and pouring the content into a different form.

For some further ideas on found poetry, see

The Arrow Finds Its Mark, edited by Georgia Heard

Or this site:  The Found Poetry Review

What are your ideas about using found poetry in the classroom?

Or, you know, just in your life?