I know that doesn’t surprise anyone really.

One of the especially nerdy habits I have is keeping a list of all the books I’ve read in a given year.

Every year at about this time, I take a look at this list, and I start a feverish push to read a whole bunch more.  It’s not like I have a certain numerical goal this year, but for some reason I just want to read as many as possible before the ball drops. With only a few weeks left until the end of 2013, the pressure is on!

This week I finished:

The Power of Habit: Why We Do What We Do in Life and Business by Charles Duhigg

This was a powerful read.  It’s encouraging to know that my life is not dictated by some talent or proclivity I’m born with but is rather a collection of the habits I have developed.  Especially insightful for anyone in leadership are his chapters on the habits of organizations.

Daughter of Smoke and Bone by Laini Taylor

And I just can’t get into the whole angel/demon stories.

Instead, it’s about some pretty heavy issues:  oppression of one race by another, revolution, family loyalty, the futility of war.

For a fuller review, see this post by Audrey that convinced me to give it a try.

This is definitely a story for older teens, because of the intensity of some of the scenes and  because I think readers will need a certain maturity to be able to discuss the ideas Taylor is presenting.

This week I will be reading:

The Name of the Star by Maureen Johnson

This book is about an American teenager who travels to London to attend school for her last year of high school. While she is in England, the country is seized by a Jack the Ripper fascination as Ripper copycat murders appear to be occurring.

Days of Blood and Starlight by Laini Taylor

The sequel to Daughter of Smoke and Bone.

The Lightning Thief by Rick Riordan

I know, I know. I’m really late to this party.  Like several years. This series is one of my son’s favorites, so I’m trying to catch up with him. This is actually one of those books that I started reading out loud to him and then he finished it on the sly.  I really need to find out what happens after chapter 3.

(“It’s Monday! What Are You Reading?” is a meme hosted by Sheila at Book Journey. It’s a great way to keep track of what you’re reading and see what others are reading each week.) 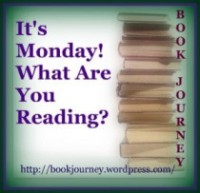