I can NOT draw them.

I mean, pre-calculus pretty much ruined me from ever being able to draw an oval, AKA an ellipse.  Those things have foci, after all. How could I ever draw one perfectly without using drafting tools?

Then there’s the whole problem of that middle space where the ovals intersect, where I’m supposed to write all the similarities between the two things I’m comparing and contrasting.  I always misjudge the amount of space I need to record similarities and make the space too small.

This is quite frustrating.

As I was explaining my issue with Venn diagrams to my students, I saw several heads nodding in relieved acknowledgement.  They got me.

So when comparing and contrasting, I turn, as I am wont to do, to tables. You may already know how I feel about tables.

In Jim Burke’s Tools for Thought, I found a great graphic organizer called “Spreadsheet Notes.”  I like to use this organizer for comparing and contrasting when working with paired poetry in preparation for Question 1 on the AP English Literature exam.

I modeled for them on the board as we work through the poems.  For this particular model, I chose a set of poems that I’m not all that familiar with:  the episode of the Sirens from Homer’s Odyssey and Margaret Atwood’s “Siren Song.”  My intention in choosing unfamiliar poems was so that I could model my own reading process more authentically.  I read the two poems and did a think-aloud while recording my observations onto a chart: 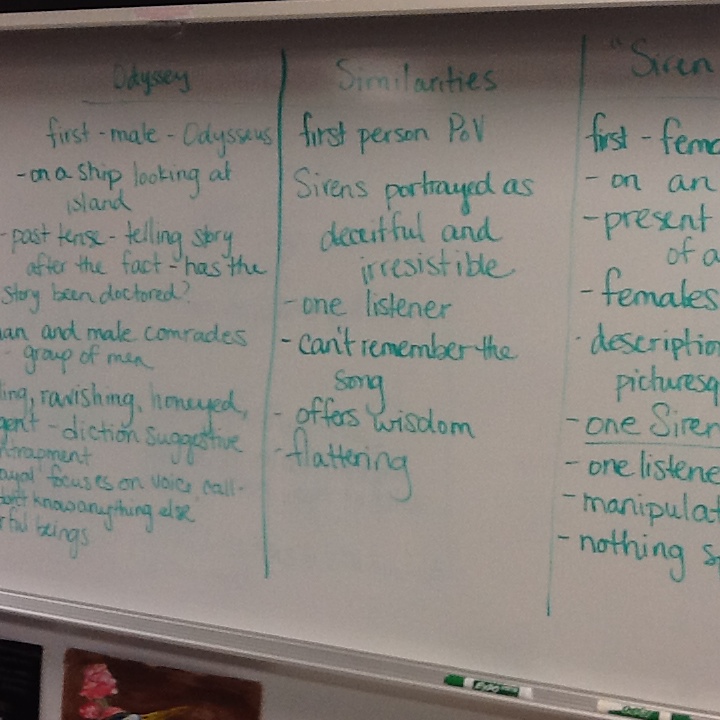 The students recorded our thinking as well:

After we created our list of unique characteristics and similarities, we decided that these two poems were quite different in their portrayals of the Sirens.

At the bottom of the Spreadsheet Notes organizer, where it reads “Summary / Response,” we wrote our thesis statement:

The next day, the students created their own spreadsheet notes in small groups with a new set of poems.

What are your strategies for teaching paired poetry?