I gotta confess a few things here. I’ve hit a dry spell with young adult literature.  I’m sick of vampires. And all paranormal romance.  I have no interest in angels, demons, or werewolves.  I struggle with the myriad details of science fiction.   I thought I had even lost my faith in dystopian novels.

No longer, my friends. My faith has been restored.

For the past couple of weeks, I have been reading the following:

For Darkness Shows the Stars by Diana Peterfreund

This dystopian novel is a retelling of Jane Austen’s Persuasion, a concept that was enough for me to check the book out. I love Jane Austen, and I will at least attempt to read almost all Austen adaptations.  The cover is breathtaking, isn’t it? I like how Peterfreund has changed the main character (named “Elliott”) to be a much stronger character than Anne Elliott is.  Rather than simply refusing a suitor because her family considers him to be beneath her, Elliott has made the choice to separate from the boy she loves because she has to make a choice between following her dreams for herself and protecting the people on her estate from the ignorance and pettiness of her father.

Legend and Prodigy by Marie Lu

I am currently reading Champion, the third novel in this dystopian trilogy. I have loved these books so much. Perhaps too much, as I have been reading them when I probably should be grading essays.

This trilogy is set in the future after catastrophic environmental events have destroyed sections of the United States and two separate nations have formed in the ensuing chaos.  June and Day both live in the Republic of America; June is an upper-class military prodigy; Day is a wanted criminal whose reputation is highly exaggerated.

You can guess where this is going.

I loved that these books were fast paced but also well-written. The characters were believable, and scenes were emotionally compelling.

And, let me just say, I LOVE reading book trilogies when all the books are already published. One of the world’s great reading pleasures, this is.

The War of Art by Steven Pressfield 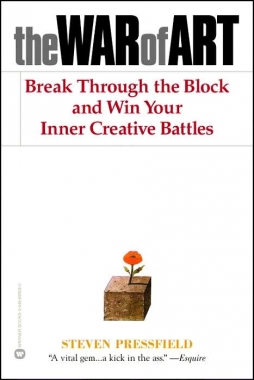 Steven Pressfield’s book is incredibly inspiring for anyone who is trying to be successful at something that is difficult and that requires a long term commitment.  Which, quite frankly, is any endeavor worth doing.  Pressfield emphasizes the importance of doing the work every day and overcoming Resistance. “Resistance” is the name he gives to procrastination of any sort. He names several popular ways in which we procrastinate and then tells us how to overcome them.  Resistance is an enemy (with which we are at war) that we can overcome rather than just a bad habit we can give a wink and a smile about.

What are your reading plans for the week? Or what is your personal “war of art”?

(“It’s Monday! What Are You Reading?” is a meme hosted by Sheila at Book Journey. It’s a great way to keep track of what you’re reading and see what others are reading each week.)